Billy Wood & His Hexes at the NASCAR Tracks

The post today by TooMuchCountry about Richard Petty winning at Richmond on Nov. 14, 1971, 40 years ago today, had a newspaper clip of the event that recounted a name I haven't heard in years, but if you were trackside in the NASCAR garage or pits in the 60s-80s, you would know the name. It was BILLY WOOD . Please look at the story link posted by TMC and you'll see how Billy had the "hex" on the field for Charlie Glotzbach at Richmond that day.

Billy was from Norfolk, VA. He had a learning disability, but tremendous knowledge of stock car racing. He showed up at tracks from Daytona to Dover. Teams would get Billy in the pits and pay him to "hex" the field for them. He looked fearsome standing trackside with a scary grimace on his face, making finger and hand signals at various cars as he "hexed" them. Stock Car Racing Magazine once did a feature piece on Billy. I wish somebody would find it and post it. He has become another part of our lost stock car racing heritage. My last memories of Billy before he died in 1991 at age 59 were of him being paid by Darrell Waltrip to hex various fields.

In addition to the mentionin the story posted by TMC on Richard's Nov. 14, 1971 Richmond win, I quickly found 3 other references to Billy, one a note of his passing, one a reference in a Tom Higgins column and one a full length newspaper story in the Wilmington, NC newspaper.

I am posting the short note of his passing and the links to the two stories. Anybody who remembers Billy and can access stories, please chime in.

Hardly anyone in racing truly believed that Billy Wood could hex their car. But nobody was quite sure, for they'd seen unusual things happen to those who doubted him. Wood, a native of Norfolk, was 59 when he died Tuesday following a long illness. For much of his life he embraced NASCAR racing, appearing everywhere from Dover to Daytona Beach, and from Langley in Hampton to Talladega.

He had a learning disability and wasn't schooled, but had an unfailing memory for racing trivia and statistics. Wood's favorite driver was whoever slipped him $5 or $10 (later, as inflation rose, $20 or $50) to keep him from jinxing their car.

From The Wilmington, NC Star News

here billy wood back in 80s alway saw billy at richmond,darlington,daytona,charlottle, he had his big radia on his should.i do know tommy elis was his driver tommy would pay him.dave thanks for post this on billy wood.

Looks like he is wearing Kyle Petty 7-11 swag in the photo Ray shared. Hmm, I wonder who may have provided that to him. Mr. Fulton, was this a payoff to counter any risk of a hex being put on Kyle's Ford?

That's a great story Dave. Had never heard of him before. This is exactly the kinds of anecdotes I was hoping for however when I started blogging about the King's wins.

Ray, thanks for posting the photo of Billy Wood.. Guess we (7-Eleven) tried to buy a little protection for Kyle as your photo shows and as TMC alludes in his post below. I always made a point to speak to Billy and ask how he was and slip $5-$10 and a hat of whatever driver I was promoting to him. It was amazing how he made all the big GrandNational / Cup races, but still showed up for every big race also at Langley, Southside, South Boston and Old Dominion. Another piece ofmy remembered stock car racing past that has slipped on forever. I hope somebody may come forward with the Stock Car Racing Magazine feature piece on Billy and post it.Believe me, the drivers and car owners were afraid of Billy. Thank you again, Ray. Your stock car racing photo collection is without peer.

Not to take anything away from Daves post here but go read the Charlotte Observer link he posted.

billy wood in 70s billy was with cale as his driver

Awesome, Ray.... Cale was probably heading to victory lane while Billy hexed the field. Thanks again for posting from your marvelous collection.

I found another story about Billy Wood. Apparently Gary Nelson didn't take him seriously back in 1984, and *shazam* Bobby Allison had the hex put on him.

Now that I think about it, ol' Gary is on Twitter. Maybe I should tweet him to see if he recalls the hexes of Billy Wood. Moo-waa-ha-ha-ha-haaa

Dave - I also found the full notes column by Al Pearce where you pulled the Billy Wood obit/tribute. Look above it. The rumor in Oct 1991 was that Hut Stricklin might take over the 43 when the King retired. In the end, Petty Enterprises ended up with Rick Wilson and then Wally Fallinback. So maybe ol' Billy put his famed hex on the Level Cross bunch on his way out of this world.

I POSTED THE SCR ARTICLE ON PHOTO PAGE...THAT,S THE BEST I COULD DO WITH THEM.

You Da Man Jerry! If anyone had the article, I KNEW it would be you. Here are in-line hi-res versions Jerry sent me.

Fellas, y'all are just way too awesome. Thank you so much for posting the Stock Car Racing Magazine article on Billy. Back in the day, there was just so much going on that a lot of folks never heard of. I sincerely appreciate the two of you with the article posting and Ray Lamm with photos of Billy helping to educate our newer fans and racing participants who never had the pleasure of meeting Billy Wood or watching him start to rub those two index fingers together while pointing themn at some unfortunate driver. We all knew that driver's goose was cooked when Billy put the hex on him. Thank you again. I hope all of our RR members read the story and "get educated."

Another awesome piece on Billy. Thanks. That story was written in 1984 by Sandra McKee, the longtime racing writer for the Baltimore Sun and one of the best in the business. I always felt fortunate that Sandy covered all of our Richmond races. She knows her stuff. Ole Gary Nelson should have given Billy his hat. Sounds like he was convinced their season went south as soon as Billy hexed he and Bobby. Ya gotta wonder.

And here's a 1977 shot of Billy Wood in the Langley Field Speedway pits in Hampton, Virginia with the NASCAR Late Model Sportsman car of Billy Smith. 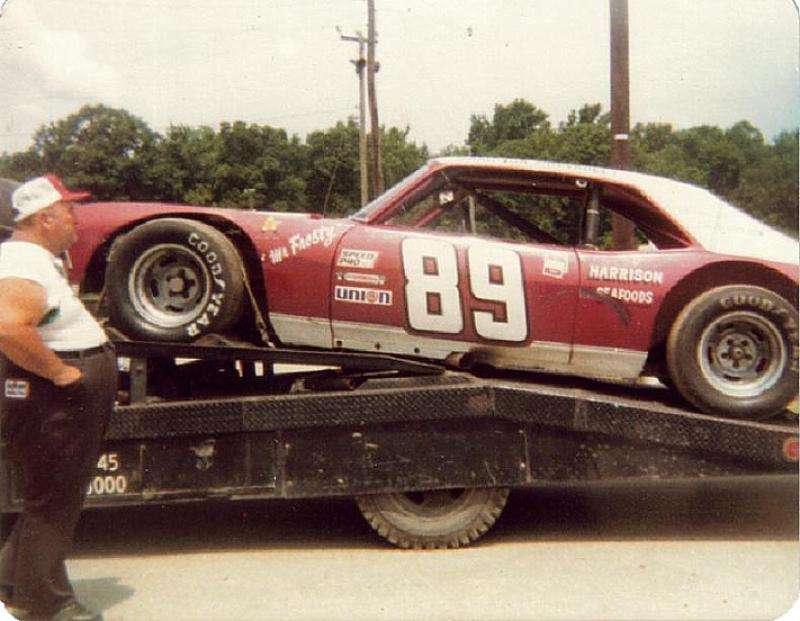 I remember about Billy. I probably have that magazine. I hav e about all of the Stock Car Racing Mags up to about 2000.

Sounds like a nice collection, Danny.  Sure wish I had saved mine.