Marvin Panch won the pole in the Wood Brothers #21 Ford. A Wood Brothers on the pole? At CHARLOTTE? That team knew even then how to set-up a car for a short hustle around the 1.5 mile track. Neil Pearson and later Neil Bonnett earned an embarrassment of riches for the 21 car on pole day for many years beginning about a decade after Pancho started P1.

Fred Lorenzen had been expected to compete for the top starting spot. However, after taking the green for his 4-lap qualifying run, his Holman Moody 28 ran out of gas on the first lap! Consequently, Fast Freddy (who then turned into Furious Freddy or Livid Lorenzen) had to wait another day for his qualifying run.

Bobby Isaac made his one and only start for the legendary Smokey Yunick. He qualified Smokey's #13 Chevy fifth. A crash during the race, however, relegated Isaac to a 31st place DNF.

Rex White qualified 12th. But after his car was safely in the show, three of his key crewmen - including Louis and Crawford Clements - were involved in an awful evening car accident.

NASCAR worked with fellow Mercury teams fielded by Bud Moore and Bill Stroppe to have Rex's pit assignment moved next to their stalls. During the race, they helped crew Rex's team earned a 9th place finish.

Panch led lap 1 from his pole start. But the day belonged to Junior Johnson in Ray Fox's Chevy. Junior led 209 of the races's 267 laps. Coincidentally, Johnson and Fox announced before the race the team planned to change to Ford for 1964 after not getting support from Chevrolet. 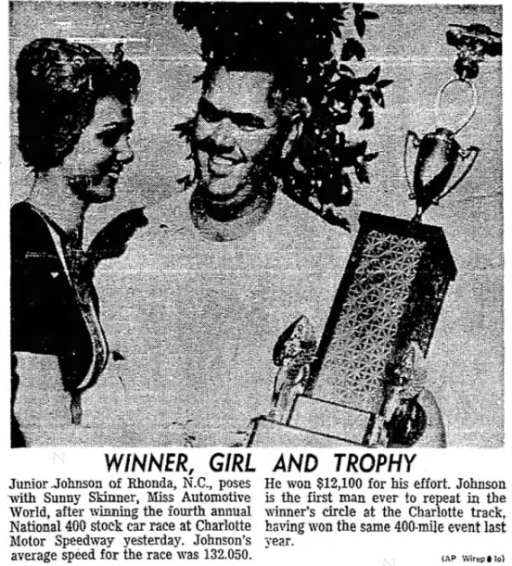