Sad news that 1973 Winston Cup Rookie of the Year Lennie Pond has succumbed to cancer.

Rest in peace, Lennie. You were one of the good guys.

Condolences to family and friends.

May he rest in peace.

A tough start to 2016 in a lot of ways. Sadly, the reality is many more obits like this are headed our way. As someone who began following racing in the early 1970s, news about the death of drivers I never knew much about has been unfortunate but didn't resonate with me as much. But now that news has begun to hit with more regularity about the deaths of drivers I did know about such as Lennie and Buddy Baker, the loss is definitely felt deeper. Human nature I suppose. But Lennie will certainly be missed. He filled in on more than one occasion for King Richard when heat and/or injuries forced from the 43 during a race.

Lennie in for Petty at 1978 Volunteer 500, Bristol's first night race. Helped get the awkward looking 43 Monte Carlo a P5 finish. The Chevy was rented-borrowed-bought-whatever from Henley Gray at the last minute after the team's only Chevy was wrecked in its debut at Michigan.

Lennie also started on the pole for my first ever Cup race, the 1978 Music City 420 at Nashville.

RR members have posted (and reposted) several photos of Lennie & Richard, as well as Lennie and King's crew....

The photo above of Lennie & Richard pitting posted by Andy Towler is an ISC Archive photo.

My thoughts are with family and friends.

Very sad. SO many in our lives being taken away by cancer. I'll never understand why the "powers" that be can't find cures.

We were buying parts from Richard Petty, Elder said. Lennie and I drove down to his shop in Randleman (N.C.) to pick something up. Richard was there and he said, You boys are pretty good why dont you move on up?

RIP, LENNIE P0ND
Thoughts & Prays to all his family and friends during these tough days.

THE ABOVE GARY BURNS PHOTO WAS TAKEN BEFORE QUALIFYING FOR THE SEPT.12,1976, RICHMOND FAIRGROUNDS RACEWAY, RICHMOND,VA., CAPITAL CITY 400 RACE. 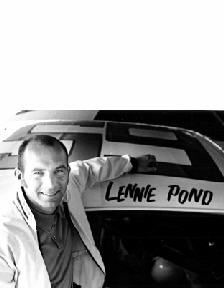 POND, Lennie Wayne, 75, of Chester, Va., passed away on February 10, 2016. He was preceded in death by his parents, Ashton and Janie Pond; and wife, Jane Lindsey Pond. He is survived by his loving wife, Catherine Pond; children, Lindsey Pond, Kent Pond and Laura Pond; grandchildren, John and James Pond; brother, A. Wright Pond Sr. and wife, Cindy; nephews, Ashton Pond Jr. and wife, Leah, Dylan Thomas; nieces, LeeAnn Pond Wilson, Georgia Thomas; mother-in-law, Arlene Thomas and husband, Brent; father-in-law, David McLauchlin; brother-in-law, Kevin Thomas and wife, Dana; numerous extended family and friends. Lennie always loved to go fast and would race anything that had wheels on it. He was a five-time late model Sportsman State Champion. He was named NASCAR Winston Cup Rookie of the Year in 1973 and won the Talladega 500 in 1978. Lennie was a familiar face at Heritage Chevrolet in Chester, Va., where he worked for over 28 years. The family will receive friends from 3 to 5 p.m. on Sunday, February 14, 2016, at the Chester Chapel of J.T. Morriss & Son Funeral Home, 3050 W. Hundred Rd., Chester, Va. 23831. A funeral service will be held at 11 a.m. on Monday, February 15, 2016, at the funeral home. Interment will follow in Sunset Memorial Park. Condolences may be registered online at www.jtmorriss.com .

Here's a link to a story titled, "Richard Petty, Others Remember Lennie Pond"

Here's a link to a story titled, "Richard Petty, Others Remember Lennie Pond"

Richard Petty remembered Lennie Pond as “a hard-nosed driver who really became a star” and made it to NASCAR’s elite Cup level despite having limited resources.

Petty was one of several in the stock car racing family who sent messages of tribute and sympathy to be read at Monday’s funeral for Pond, who died Wednesday of complications from cancer. Pond, a resident of Chester, was 75.

Although Monday’s snow made driving difficult, about 200 people attended the funeral at the Chester chapel of J.T. Morriss & Son Funeral Home. Several hundred also had saluted Pond’s memory Sunday at a viewing at the chapel.


Many in the stock car racing community were in Daytona Beach, Fla., where preparations are underway for Sunday’s Daytona 500. Among those who emailed or tweeted condolences and memories were Dale Earnhardt Jr., Kyle Petty, Harry Gant and Larry McReynolds.

“Racing at the time was a smaller group,” Richard Petty said. “We were still growing the sport and everyone was just close. Lennie was a guy everyone knew because he was just one of the guys. Everyone got along with him.

“Our thoughts and prayers are with Lennie’s family today.”

Ed Clark, president and general manager of Atlanta Motor Speedway, remembered Pond as a driver who was “positive, optimistic, had great determination and was a talented racer. ... His crew members, most of whom were volunteers, rallied around him to put forth a major-league effort against the top teams.”

A message from Ricky Rudd — another Virginia driver who, like Pond, won NASCAR rookie-of-the-year honors — remembered Pond, “not only for his driving skills but for his willingness to help new drivers adapt to the race track wherever we might be. When I was struggling to get started in NASCAR, Lennie was always available with advice and chassis set-ups.”

Richard Childress, one of the sport’s most successful car owners and a former driver, recalled in his message that “Lennie was a close friend when we were both getting started in stock car racing. He was always an encouraging voice and someone you could always lean on.”

Sports writer Al Pearce, a member of the Virginia Sports Hall of Fame who is in Daytona to cover Sunday’s race, wrote Pond was “especially kind and accommodating to me, whether at Langley (Speedway in Hampton) or Daytona or anywhere else.”

Pearce recalled a turning point in Pond’s successful run for the 1973 NASCAR rookie title when, after his car was destroyed in a fiery crash at what was then Richmond Fairgrounds Raceway, the team showed up seven days later at the track in Dover, Del., and Pond’s No. 54 Chevrolet “was its usual immaculate self. Lennie finished ninth that day.”

Pond, who won multiple track and state championships in short-track competition, went on to make 234 career starts at the Cup level. He finished fifth in the 1976 series points race and recorded one victory, the August 1978 race at Talladega, Ala., NASCAR’s fastest speedway.

Monday’s service included fond memories from others who were close to Pond. Former crew member Barry “Hooker” Hopkins remembered Pond “taught me to be a professional at my work.”

Lin O’Neill, who won multiple Southside Speedway championships with Pond as his mentor and who was a Pond fan from his preschool days, wrote in his eulogy that Pond was his hero who “taught me everything I know about driving race cars.”

O’Neill also recalled the respect Pond commanded in his later years from everyone in the garage area at Richmond International Raceway.

At Monday’s service, Copeland said Pond was “the sole reason why I chose public relations for my profession. It was Lennie. All Lennie.”

At the end of the service, those in attendance saluted Pond’s legacy with a standing ovation.

“It really showed how strong the emotions for Lennie still run all these years later,” Copeland said after the service. “It would have made him smile.”