In the history section, NASCAR historian, Jonathan Mauk related that the first ever NASCAR race on a DIRT road course was held in 1955 at Willow Springs road course in Lancaster, California.

The road course was an oiled, dirt 2.5 mile layout and the race was the third of the 1956 season.

Here are the results from Racing Reference, which doesn't mention dirt. Anybody have a Greg Fielden writeup that tells of the dirt road course??

From NASCAR.com 2009 article comes this:

The nine-turn, 2.5-mile road course about an hour north of Los Angeles was constructed in 1953. There is some dispute over the type of surface that was in place when NASCAR visited for the first time three years later. Originally designed with an oiled dirt surface, making it a rare dirt road course at the beginning, Marvin Panch contends that the track had already been paved with asphalt by 1956.

In any case, Willow Springs was one of the California native's favorites. He finished second to Chuck Stevenson in 1956, then won the race the following season as teammate Fireball Roberts made it 1-2 for the DePaolo Engineering factory Ford operation.

"I was very fortunate out there," Panch said. "I was able to win the race. It was a good road course. I liked it, naturally because I won there. You had a backstretch, a long straightaway, then you had to go through a series of esses. It wasn't too much different than Riverside."

The track continues to host a full schedule of events, including racing schools and vintage sports car and club racing.

A few snippets I found re: Willow Spring indicate the track was "paved". Is use of paved the same as asphalt? Would seem so.

Racing director Harold Mathewson reports nearly 60 entrants, whose hometowns range from Merced to Las Vegas to San Diego, will compete. It is considered the most important race yet staged on the Willow Springs layout, located off Highway 6 north of Lancaster. The two-and-a-half-mile paved strip at Willow Springs is considered an ideal one for the modified stocks. They have hit speeds in excess of 100 miles an hour on the long straightaways.

Sports car competition will be staged on the 2.2-mile paved road course at Willow Springs Sunday with a field of 144 cars lining up for the event sponsored by the California Sports Car Club and Long Beach MG Club. The tricky course, built on the side of a hill, will be the site of highly spirited practice runs on Saturday.

What will America's Ford Thunderbird do in competition against Europe's speed-wagons? That's one of the top queries circulating among thousands of sports car fanatics, and today's third running of the Willow Springs Road Races may provide the answer. Entries closed with listings of virtually every type of foreign and domestic sports car make, with Race Chairmen Joe Weissman and Ray Frug anticipating a turnout of at least 10,000 fans to view the five-event program over the tricky two-and-a-half-mile paved course.

And I found this in June 12, 1954 Bakersfield Californian - nearly 18 months before NASCAR visited the track.

One thing for sure, Chase, by the time I was sponsoring Derrike Cope and his Jefferson Racing Thunderbirds for 7-Eleven in Winston West competition at Willow Springs in 1984 & 1985, the whole deal was definitely paved with asphalt as seen in our member Scott Baker's photo of Derrike there in '85. 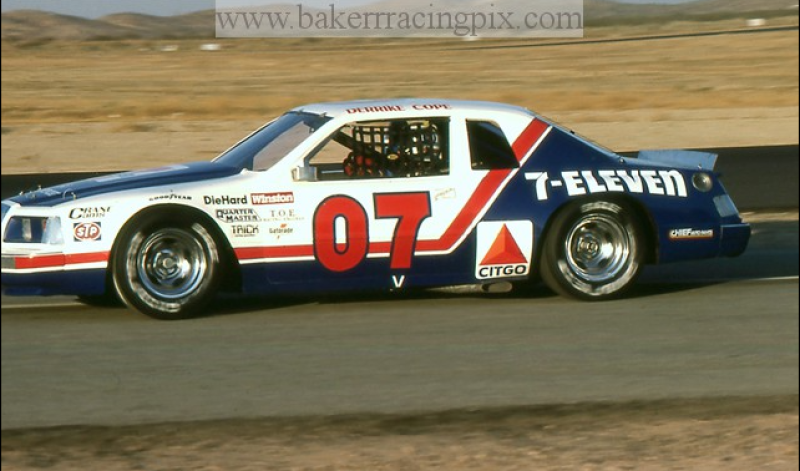 Here is a link to an interesting 1991 Willow Springs article written by the late L.A. Times reporter, Shav Glick:

In this 1984 Scott Baker Willow Springs photo, the late Eric Horn ("Big E") is hands on during an engine swap on Derrike Cope's Jefferson Racing / 7-Eleven Ford Thunderbird. Horn came east with Cope in 1986 and later worked many years for Robert Yates Racing. 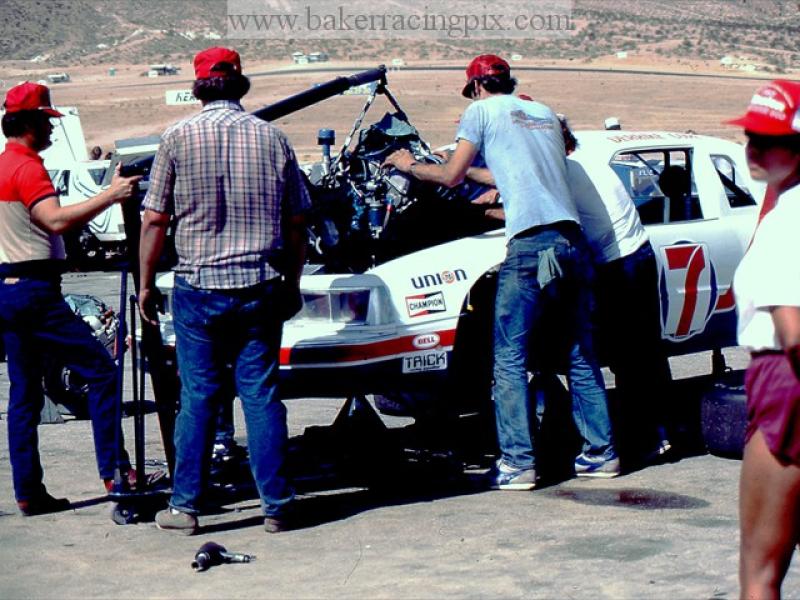