The 1966 Grand National season came to a close at Rockingham with the running of the 2nd annual American 500. This was the first of only two times the season closed at Rockingham the other being in 1973.

David Pearson had locked-up the seasons championship over James Hylton. Richard Petty finished third. He and everyone else were waaaay behind Pearson and Hylton.

John Sears helped promote the race by advertising it on his car. From Dennis Andrews collection.

Two drivers who certainly made their mark on the Grand National circuit and would be elected to the NASCAR Hall of Fame when formed decades later made their final career start at Rockingham: Junior Johnson making his first major GN start in a year (from Ray Lamm collection)

Petty Enterprises regrouped nicely in 1966 after Richard Petty had to sit on the sidelines for much of 1965 because of the Chrysler boycott. In 1966, PE fielded a second car occasionally though not as frequently as was done in the early 1960s. Marvin Panch who had lost his ride earlier in 1966 because of another manufacturer boycott this one by Ford picked up a ride with the Pettys at Charlotte for the World 600. In his first outing, he won the race with a relief-driving assist by Richard. The team hired him again to run 4 superspeedway races near the end of the season Atlanta, Darlington, Charlotte and Rockingham.

Because of a prior commitment to test brakes at Daytona International Speedway, Panch was unable to race at Rockingham. So on Thursday of race week, the team hired East Tennessee's PAUL LEWIS to pilot the #42 Petty Plymouth. It was his one and only start for Petty Enterprises. From Paul Lewis collection.

With Lewis moving to the Petty ride, Buddy Arrington then parked his own #67 Dodge and stepped into Lewis #1 Plymouth. When the day was over, Buddy had the best finish between himself and the 2 Petty entries.

Fast Freddy Lorenzen in the Holman & Moody Ford nabbed the pole on Wednesday of race week, and King Richard timed his Petty blue Plymouth on the front row with him. Source: News and Courier

Lee Roy Yarbrough discusses some pre-race strategy. Paul Lewis' 42 can be seen in the background.

The Golden Boy and The King went toe-to-toe from the jump. They traded the lead back and forth for over 60% of the race. From Harvey Tollison collection.

Not only did Junior Johnson make his final career start, but he also entered a #26 Holly Farms Ford for USAC regular Gordon Johncock. The car timed fast as Johncock qualified 3rd, he lost an engine and finished 27th. From Harvey Tollison collection.

Early in the race, the championship contenders Pearson and Hylton raced nose-to-tail with upstart Bobby Allison in his #2 Chevelle close behind. Pearson closed out his championship season with a 7th at Rockingham. Hylton finished 10th. Allison lost an engine early and finished 41st. From  Harvey Tollison collection.

Curtis Turner had an uneventful weekend at the Rock in Smokey Yunick's Chevrolet. He qualified 10th but lost an engine, collected Dick Hutcherson as he dumped oil, and finished 34th.

After many laps up front, the Mopar hemi failed on the 43. Petty was done at lap 320 after having led 180 laps. Unfortunately, Maurice Pettys engine soured in Lewis 42 as well, and he exited the race just prior to Richard. Petty was credited with a 28 th place finish with Paul Lewis right behind in 29 th .

With 43 out of the race, Lorenzen continued on unchallenged. He led the final 220 laps and 320 overall. His Ford simply smoked the field, and he won by 4 laps over second place finisher Don White and third place Jarrett in his final event. From Harvey Tollison collection.

The winner was happy - though car owners from throughout the top 5 were not. Protests were slung from right to left over Lorenzen's car - as well as against the 2nd thru 5th place finishers. In the end, however, NASCAR said all was fine and Freddy's win stood.

Ned had a great day in his final race by knocking down a 3rd place finish. Yet he had to bear a bit of embarrassment as he accidentally set off his fire extinguisher as he tried to loosen his belts. Many thought he was on fire - instead he likely just had a flushed face by the DOH! moment.

My buddy, Frank and I again took the special race train from Richmond down to Rockingham for this race just as we did for the March 1966 Peach Blossom 500. In fact, the brochure for this event has the same slogan that was on our ticket brochure for March - "The Superscenic Superspeedway Where The Fan Always Is First" - a mouthful of a promotional slogan that disappeared at some point from the Rockingham lexicon.

My only memory of this race is of Ned's fire extinguisher going off. Being big Chevy and Chrysler fans, we thought that was just wonderful, but in retrospect it was a lousy way for Ned to end a stellar career. I recall Stock Car Racing Magazine featuring a Ned fire extinguisher photo in its race coverage.

One other note - it's no small wonder that the car of "Big John" Sears was promoting the Rockingham track. Sears' car owner (pre-Benny Parsons) was L.G. DeWitt, a majot investor and later majority owner of NCMS.

Should be March 1967 SCR if anyone still has it and could share pics and article.

It just occurred to me that the sizable gentleman standing with Ned Jarrett in the SouthernMotoRacing photo posted by Harvey Tollison is none other than J. Elsie Webb, attorney and one-time head honcho of North Carolina Motor Speedway at Rockingham.

TMC-Chase sometime back posted a 1965 NASCAR Newsletter that has a story featuring the Rockingham track's forthcoming Fall 1965 debut. Here is a cropped photo from that issue of Webb with Richard Petty:

So, Tim Leeming, his Uncle Bobby and all those other rabid fans wanting to watch the race from the infield were responsible for the redesign of NCMS in 1969!

Ned Jarrett (11) on the high side racing USAC regular Jack Bowsher (33). The race was the 2nd of 4 career GN starts for Bowsher. From Richard Guido collection. 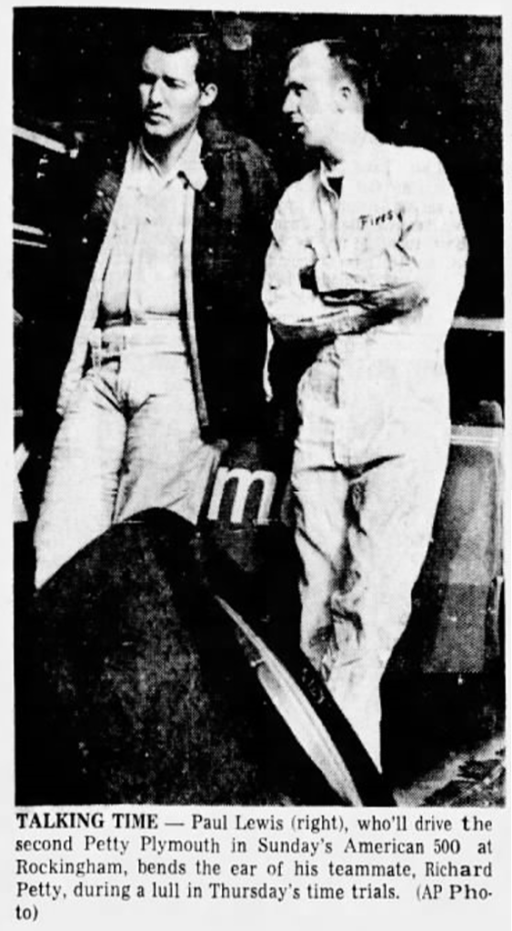