Hanford Motor Speedway in California, which had originally been named Marchbanks Speedway after its builder, was the first superspeedway west of the Mississippi. The complex of several tracks was surrounded by the 1.4 mile paved triangular track (which in an aerial view might be mistaken for Pocono) where Rex White and Joe Weatherly had raced in 1960.

On November 29, 1964, the track in the middle of nowhere hosted the final race of the 1964 USAC stock car season. I don't really have any details except for the news clipping telling of AJ Foyt winning the Billy Vukovich Memorial Race in his 1964 Hemi Dodge and Parnelli Jones taking the USAC stock car points title.

In a sobering reminder of the staggering loss of drivers during the 1964 season, the race results state that the car originally scheduled for Bobby Marshman was driven by Marvin Porter. Marshman had been severly injured during an Indy car test at Phoenix the day previous to the stock car race named after another deceased driver and died from his injuries in December.

Though not too clear, the History of Marchbanks Speedway site has several color photos posted of the event. They include a starting lineup shot, a look at the turn banking, a spin by John Ward and Bill Myers, a crash by Lloyd Ruby and a shot of AJ in victory lane.

Reminiscent of the inaugural Charlotte Motor Speedway race, a number of cars appear to have dirt screens mounted in front of their grills.

The memorial below to the race's namesake, Billy Vukovich, stands at the convention center in nearby Fresno, California:

The plaque reads as follows:

This monument is dedicated May 30, 1956 by the citizens of Fresno to the memory of Fresno's own Billy Vukovich who met his death while leading the Indianapolis 500 mile race May 30, 1955.

Billy Vukovich who lived all his life in Fresno won almost every major automobile racing championship in the United States. Among his racing accomplishments are the following: 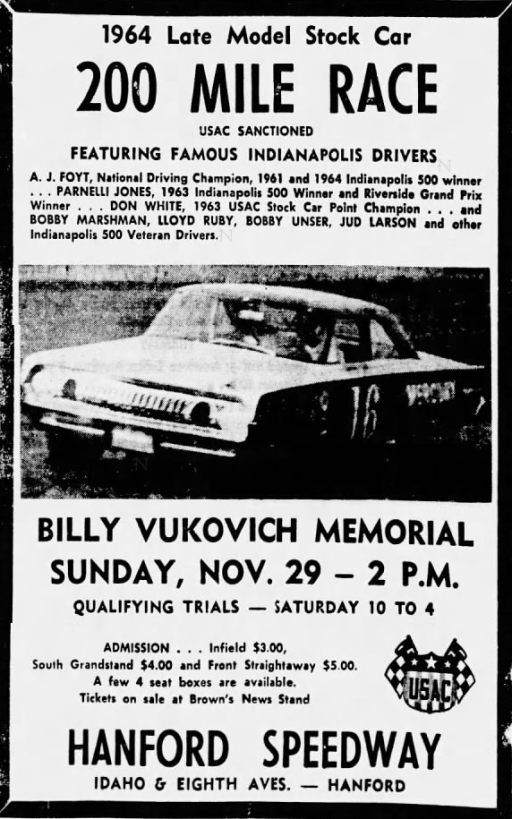