Another Dale Earnhardt Rarity Found in My Garage Today

Certainly not worthy of Antiques Road Show, but I just came across another family heirloom in a box in the garage.

I doubt many of you have ever seen this or even remember it.

The shirts were sewn in Wrangler sewing plants in the United States of America. The screen printing was sourced by Earnhardt family friend, Paul "Little Bud" Moore and the shirts were sold at the track by Little Bud for Dale. Wrangler's accounting department kept up with the royalties for Dale.

I still have no camera at the house, so a partial scan is the best I can do right now.

This scan shows just the front of the shirt... it was white with blue long sleeves and a blue neck band. Dale was wearing one of those fancy cowpoke hats with a Wrangler hat band on it. The artist caught every single one of Dale's crow's feet on each eye... a real rarity.

This particular shirt is a child's size Large worn by my then 5 year old daughter, Gwyn during the 1981 season. She'll be 37 in December.

When Wrangler and Dale affiliated with Richard Childress and changed the car number to #3 in late summer 1981, all remaining shirts and all other Wrangler / Earnhardt souvenir items bearing the number 2 were shredded and burned.

Hey that's cool! In fact, looks better than most designs out there today! Can't wait to see the rest, thanks for sharing Dave!

Verycool Dave and thanks for sharing.

Dave, you should put this in a frame and display it. It's very nice and "Made in the USA". Thanks for sharing.

Thanks for sharing Dave.

Just added a photo of the "Comin' At Ya!" tee shirt sourced by "Little Bud" Moore featuring the 1982 Dale Earnhardt "Big" Bud Moore Wrangler Thunderbird. The shirt was being auctioned on ebay.

From Dale Jr's Director of PR to me when I showed him the pics on Twitter today...

"Very cool. I know someone who would want that shirt."

I take that as code for: "Name your price." LOL

Not for sale... now or ever. Memories.

Oh I don't blame you one bit. Would have been remiss if I didn't at least pass the message along.

Would be cool if somehow there was a retro t-shirt made of it.

This is the only mention on the internet I can find of the image on this shirt. I was searching to find out more about what I've got--a large framed version of that image. I don't know the whole back story--it was given to my Dad by a co-worker of his sometime around 1984. Hung in my bedroom until the early 90's, and it's been in the back of a closet at my parents' home ever since. I grew up in Greensboro, and Dad seems to remember that co-worker having some sort of family tie with Wrangler, so maybe it actually came from their corporate offices?

This thing is big--23" x 25" inside the mat, wood and glass frame. It's missing the "1980 Winston Cup National Champion" wording but other than that, it's the same image. Looks to be on nice textured paper. Were these ever done as a run of prints? If not, this could be an original. Hard to tell behind glass but I think I can see some relief to the white highlights in the hat feathers.

Anyone have more info about this picture/art work? Thanks much... 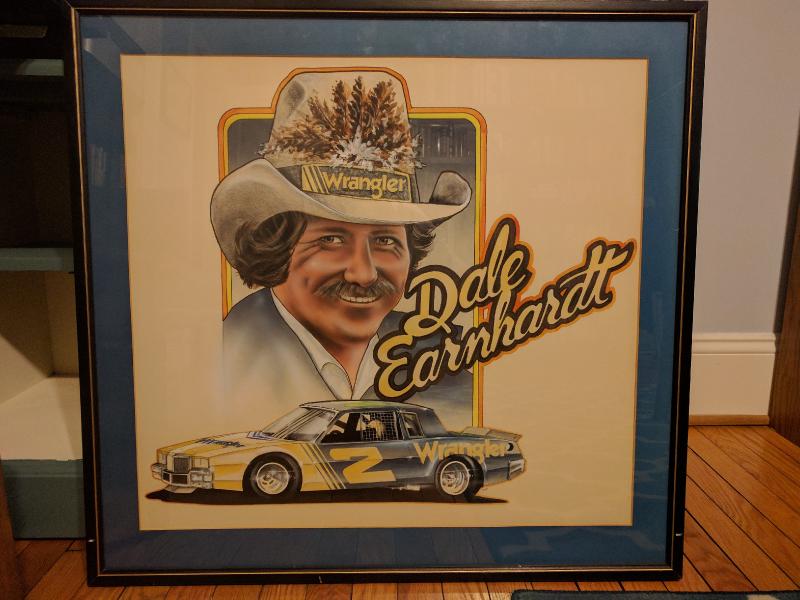 I don't recall any prints being produced.  You just mght have the original art.

I noticed something funny looking about your picture/print/art work?

What words is photo shop out/blurred out in the blue/green section of the top right side of Dale Earnhardt's Wrangler cowboy hat?

Take it an art dealer that you can trust.

The art dealer should be able to tell you what it is without taking it out of frame or removing the glass.

Might be the same airbrush artist that did your art work? 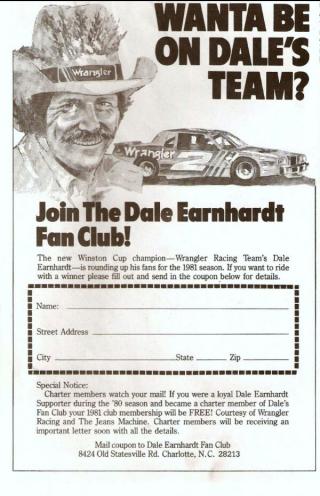 I noticed something funny looking about your picture/print/art work?

What words is photo shop out/blurred out in the blue/green section of the top right side of Dale Earnhardt's Wrangler cowboy hat?

Take it an art dealer that you can trust.

The art dealer should be able to tell you what it is without taking it out of frame or removing the glass.

What you're seeing in the upper right blue section next to the cowboy hat is the reflection of a bookcase that was opposite the picture in the room where I took the photo. Nothing blurred out, though I can see how you might think that. The glass panel over the picture was creating quite a few reflections; if you look in the outer blue ring you can see the floorboards, the rug, etc.

Taking it to an art dealer to see if it can be determined as original might be the way to go. I'm also in Richmond; do you have any suggestions?