The 33rd, and next to last race of the 1952 season was run at the 1 mile dirt track known and Lakewood Speedway in Atlanta, GA. The Championship was being contested between Herb Thomas and Tim Flock, with Tim holding a comfortable, but not insurmountable lead over Herb.

Herb's brother, Donald, always hidden in the shadow of his famous brother, qualified a second Herb Thomas Hudson on the pole with a speed of 72.874 mph with Herb Thomas qualifying second. Two of the FABULOUS Hudson Hornets on the front row, number 9 - Donald, number 92 - Herb. Fonty Flock would qualify the Air Lift Olds third, Tim Flock in Ted Chester's Hudson fourth and Roscoe Thompson in a Studebaker would start fifth.

Herb Thomas jumped into the lead on the green flag and was steadily pulling away from the field. Lee Petty, Donald Thomas, and Tim Flock were hotly contesting second place, but the lead was all Herb. On lap 86. the axle in the Herb Thomas Hudson broke as he exited the second turn and the big car came to a stop on the back straight. The caution was displayed and Herb jumped out and flagged down his brother. Donald stopped on the track and Herb climbed in the number 9 and Donald sat and waited for the wrecker to come haul off the number 92 and give him a ride back to the pits. At the time, a relief driver could gain points for where the car finished based on a formula NASCAR had devised to allow relief drivers to earn points.

Tim Flock's car owner and crew chief immediately expressed a howl of dissent to NASCAR for allowing Herb to transfer cars on the track rather than in the pits and to further cause issues, Herb was now leading in the car his brother started. After being allowed to lead two laps under caution, NASCAR black flagged Herb and made him pit. Herb returned to the track at the rear of the pack with only 14 cars running. At the time, Lee Petty was leading.

With 11 laps to go the green was once again displayed and Herb mounted a charge to retake the lead in his "back up" car. On lap 94. Thomas stormed around Petty and took over first place. He would hold that position to the checkered flag. Herb would leave Lakewood 194 points behind Tim Flock with 1 race remaining in West Palm Beach, FLA, on November 30th. Tim Flock would go on to win the title in 1952.

An interesting note is that NASCAR records are to reflect the name of the driver STARTING the car in the finishing order. Herb Thomas so over dominated his brother Donald, that Donald was not given credit for the win in the NASCAR records until quite sometime AFTER the end of the 1952 season. Seems NASCAR only had an interest for Herb Thomas , over looking the fact that Donald had won his first Grand National Race. In fact, NASCAR continued, for quite some time, giving credit to Herb Thomas for the win although he was driving in relief.

The average speed for the winner was 64.853mph, being slowed by 3 caution flags There were 18,000 fans in attendance to witness the Thomas Brothers combined effort.

* Robert is shown as making 9 laps before being "disqualified". There is no reason given for the disqualification that I can determine.

For 52 years Donald Thomas held the title of youngest winner in GN/Cup history, until Kyle Busch won in 2005.

Man, I would have loved to have seen Herb Thomas race.

Wiesemeyer liked to wear bowties, sometimes even when driving. This habit earned him the nickname "Bowtie Bob!"

Below are several photos from the 3WidesPictureVault site of Bob with photographer credits embedded where available. "Bowtie Bob" is easily picked out in tjhe group shot from Flemington.

Also found that he'd once been disqualified at Flemington for showing up with a Corvair that was too low to the ground.

Bob passed in 2003 . This is his obituary in The Standard newspaper in Macclenny, Florida:

Seeing Tim's note that Fonty Flock was driving the Air Lift Olds got me wondering if that onetime mainstay of NASCAR Grand National stock car racing was still around.

The answer is "YES."

The clip below is taken from that web site:

While searching around for information about Air Lift, I found the article below at www.airsociety.net :

In a simpler time when a mans ride was judged not by how flush his fitment was or by how tucked his tires were, but by the time it took him to tear up the 4.1 mile long Daytona Beach race track;
Air Lift emerged to reign supreme.

What started as the brain child of GE Engineer Claude Pemberton and Oldsmobile Toronado developer Don Perkins in 1949 as a means to offer extra lifting capabilities to vehicles carrying huge loads, quickly turned into a thriving business that now employs over 70 people and services more than 543 vehicles types and classes.

At the time of its inception the idea of using pressurized rubber air sleeves inserted into existing coil springs to provide added stiffness and lift for extremely heavy loads was an unheard of concept. This quickly turned around as people began witnessing first hand the extreme carrying capabilities of the Air Lift air springs. Of course once it was proven that air springs could carry weight more efficiently than coil springs, the next step was inevitably the race track.

Before the Bonneville Salt Flats were recognized as the best place on earth to test what your ride was truly made of, the Daytona Beach Road Course in Daytona, Florida was considered to be the premiere location for racers with something to prove. More than 15 land speed records were set at this very track over half a century ago with racers such as Alexander Winton, Jack Radtke, and Ransom Olds tearing up the ocean strip.

Of course racing on sandy beaches had its own set of obstacles to overcome such as having proper traction while transitioning through the hairpin curves that connected the 2 mile long beach strip of the track to the freshly paved A1A highway. Air Lift quickly jumped into the arena and started manufacturing performance based air springs to support these heavy vehicles as they navigated the course.

What started off as a bootleggers way of blowing off steam on weekends, NASCAR quickly turned into the largest racing event in North America. Racers like Bobby Griffin, Junior Johnson and many of the Petty family ran Air Lift springs and swore by them. On February 22, 1959, Lee Petty won the very first Daytona 500 with an Air Lift equipped Oldsmobile Dynamic 88 (#42) in what became a story for the ages.

Petty and rivals Johnny Beauchamp, and Joe Weatherly drove side by side by side across the finish line at the final lap for a photo finish. Beauchamp was declared the unofficial winner, and drove to victory lane to collect his prize. Petty protested the results, saying: I had Beauchamp by a good two feet. In my own mind, I know I won.

It took NASCAR founder Bill France, Sr. three days to decide the winner. In the end, with the help of the national newsreel, Petty was officially declared the winner.

Buck Baker was another Air Lifted driver who starred in 682 races, which sets him at 3rd most starts overall in the history of NASCAR. In 1953, 1960 and 1964, Baker won the Southern 500 at Darlington Raceway which eventually saw him pick up 46 victories in his over 40 years of racing.

By the late 1960s NASCAR began heading in a different direction with regards to its suspension regulations so Air Lift transitioned into the drag racing scene. Legends of the 1/4 mile including Butch Fedewa rose to national stardom after winning races all over the United States. Eddie Schartman drove the Air Lift Rattler (Comet and later Cougar) to multiple wins throughout the late 60s as well.

While no one can say for certain what the future has in store, by bringing the passion of its old school heritage to the youth of the new millennium, Air Lift is in the drivers seat yet again and is showing the world that it isnt just a one trick pony and is here to stay for good.

Big thanks go out to Ian Cain and Corey Rosser from Air Lift for the support and wealth of information and resources supplied for this article.

All these pictures are incredible. Thank you all so much for these. Love seeing my life before me back when I was younger and smart. I really feel down today and these help "lift" me up. 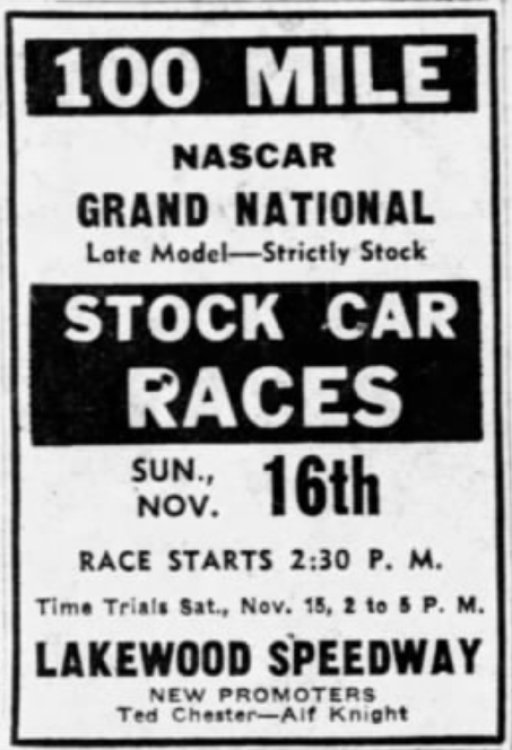