The final race of the 1956 season was held at Wilson Speedway in Wilson, NC. A half-mile dirt track which has a storied history in NASCAR circles. This was the 56th race of the tumultuous 1956 season in which Carl Kiekhaefer and his pristine white Chrysler dominated the circuit. This was the season in which Kiekhaefer had NASCAR schedule an additional race to allow his driver, Buck Baker, to gain an advantage in the points. That race was on October 23rd and you can go back to read that in the History Minutes as we reported on that race on that date.

If anything, Carl Kiekhaefer was the first of the really big time spenders in NASCAR. He had everything money could buy, including drivers. He even bought off NASCAR but we all know that today that is no big deal. But, back in 1956, NASCAR was trying to get established as a sport and really catered to Kiekhaefer as we will see in this History Minute.

Twenty-four entries qualified for the 100 mile race at the Wilson track. Three of those qualifiers were Kiekhaefer teams. However, Pete DePaolo had FIVE of his Ford teams entered. Buck Baker won the pole in the big Chrysler number 300b. Ralph Moody in one of DePaolo's Fords would start second, Speedy Thompson in another Kiekhaefer car third. Speedy was the driver who intentionally caused the accident in Shelby that almost killed Herb Thomas, removing Herb's opportunity to win the Championship over Baker. Fourth place starter was Gwyn Staley in his own Ford and Bill Amick in another DePaolo Ford would start fifth.

Now follow this closely, because it can be confusing, even to fans of NASCAR today who are accustomed to race manipulation at every turn. Speedy Thompson took the lead on the green and held it until lap 185 of the 200 when he was forced to pit for gas. Baker, who had been running second in the team car made it to lap 197 before his big Chrysler began to sputter and he headed for the pits for a splash and go. This left Joe Weatherly in the lead and Weatherly was determined his Ford could go the distance so he pressed on.

Coming off turn two on the final lap, Lil Joe's car ran dry and he was coasting around the track with no power while Baker was running full bore and covering ground like a rocket. The number 112 Ford of Weatherly was barely in motion as he rolled under the checkered flag, powerless, as Buck Baker came screaming by him. Weatherly beat Baker to the line by two car lengths and Weatherly was declared the winner. But hold on here!!!!

Carl Kiekhaefer filed an immediate protest claiming that the official scoring stand was located in turn one and because of that location, Baker got to the "official clock" before Joe so Buck was the winner. NASCAR actually deliberated for several hours, admitting there was no rule in the book to cover such an occurrence and there were no pencils available to write one on the blank page in the rule book. So, after several hours, NASCAR ruled in favor of Kiekhaefer and awarded Buck Baker the win and relegated Lil Joe to second. Buck Baker wrapped up the championship with his main competition lying in a hospital bed.

Top five finishers in the points for 1956 were:

Finishing order for the Wilson Race:

There was so much unrest by fans after the incident with Speedy Thompson and Herb Thomas, that Carl Kiekhaefer, after winning the championship and 30 of the 56 races with different teams in 1956, disappeared from the scene. Speedy Thompson continued his career and very little is known about his feelings about the incident. But the fans blamed it on Kiekhaefer. When the 1957 season got underway, gone were the big white trucks and the white Chryslers and Dodges. Gone was the man who had been so demanding that Tim Flock walked away from the team rather than continue to live under the dictator like conditions.

PERSONAL NOTE: I rarely make personal comments on races this far back in the history but I need to on this one. When Kiekhaefer first came into NASCAR the year before, my Uncle Bobby, who, although a fan of Lee Petty and no one else on the Grand National Circuit, did like the idea of those Mopars having such a strong presence in the sport. Uncle Bobby was a Mopar man. I remember when the Herb Thomas incident happened although I admit much of that memory was refreshed in a conversation with my Uncle Bobby months ago. Bobby was lamenting then how money had ruined NASCAR and went back to the Kiekhaefer days blaming Carl for bringing that issue to the front and center. But he said something profound at the time when he said that "money will buy anything you want and it bought Kiekhaefer the success he wanted". Bobby went on to say that what was done to Herb Thomas should have haunted Kiekhaefer til his "dying day" because that was "flat wrong". Must say I have to agree with that. Wonder how Speedy would have felt if Herb had been killed in that accident?

I did add my personal feelings in today's Minute mentioning the lack of pencils for the NASCAR officials to write in a rule to cover the Kiekhaefer protest. I apologize for that but, like Uncle Bobby, I know Kiekhaefer slipped the "officials" some of those "greenies" as Smokey called them, and the reason it took several hours to render a decision was the continuing addition of "greenies" to the pockets of those officials. This was not one of NASCAR's finest moments.

I'm afraid we've all seen the effects in NASCAR at one time or another of the old "Money Talks" axiom and are familiar with the altered version of The Golden Rule - "He With the Gold Rules."

Wish I could have seen a GN race on the Wilson track, a fine old dirt half-mile - the "Gem of the East" as Bobby Williamson nicknamed her.

Greetings from 35,000 feet en route from Nashville to Boston via Baltimore. Anticipated this might be Tim's focus for the day so I clipped an article for it last night. This one is sourced from The Robesonian . Only one I could find - guess the rest of the media missed their deadline for Monday awaiting NASCAR's indecision before making a decision.

The pace lap before he start with Buck on the pole and Ralph Moody alongside him.

That's the first time I've ever seen a picture of the old covered Wilson grandstand that burned down on Easter Sunday 1959.

Chase, I hope you managed to squeeze in a crabcake or two while changing planes in Baltimore.

If you missed the crabcakes in Baltimore,

You can still get them at Boston-Logan,

Or, if you decide to detour back Charlotte way, get 'em here:

Speaking of Boston-Logan Airport , you may remember the photo below from the LaVerne Zachary collection:

The pictured Wrangler cargo plane (this photo was taken at Blue Bell, Inc. Aviation in Greensboro - 1981) crashed at Boston-Logan on New Year's night, 1984 when the right landing gear failed to deploy.

The plane had taken a load of denim to our plants in Puerto Rico and was returning with a load of computer parts to Boston.

Here is another photo of the plane that crashed at Boston-Logan (it was repaired and returned to service) :

The photo below is the other big Wrangler cargo plane in the 80s - a near twin to the plane that crashed:

Both planes were Canadair CL-44s .

And, contrary to rumors, Dale Earnhardt was NOT at the controls when the plane skidded from one end of the runway to the other doing 360s!!! At least his name wasn't mentioned in the Lexington Dispatch AP account:

Ha. Actually I DID eat at Phillips in BWI. But I went with fried, butterflied shrimp vs. crabcakes. One, a Baltimore regular on the plane said Phillips cakes were only OK. Two, I was a bit bent anyway because they didn't serve Natty Boh. Matter of fact, the hostess with the leastess hadn't even HEARD of it. How is that possible? LOL

An account of the 1959 Easter Sunday fire that destroyed the pictured Wilson County Speedway grandstand from the Jack Walker collection at Carolina Race Place:

Well, sir... they need a good spanking for not stocking Mr. Boh's brand!

Thanks for the comment Charles. I love doing these Minutes and with the contributions of Chase and Dave and, on occasion Dennis Andrews, we are building a real record of history here. Thanks for reading and commenting. 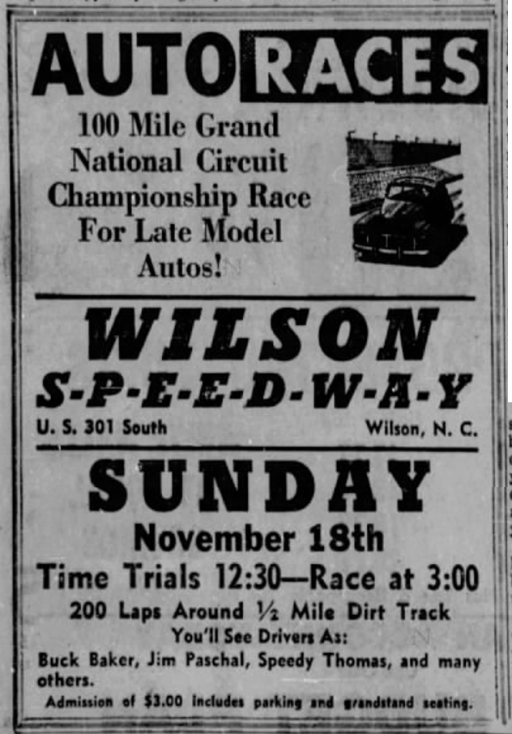