NASCAR's Grand National / Cup series has never raced on Christmas Day or New Year's Day. And the cars never raced on New Year's Eve either which is mildly surprising - especially back in the 1950s. The latest the teams participated in a NASCAR-sanctioned GN event was on December 30th way back in 1956. Fifteen cars raced in the makeshift Titusville Cocoa Speedway in Titusville FL in the 3rd race of the 1957 season. The track was a 1.6 road course that used a good bit of an airport runway.

Looking at the entrants for the Indian River Gold Cup 100, one may scratch their head at some of the oddities. One-third of the cars were fielded by Pete DePaolo's Ford team, and Petty Engineering took two Dodges to the race for Lee Petty and Tiny Lund. Yet even with half the field being comprised of 2 teams, Paul Goldsmith won the pole in his Smokey Yunick Chevy. Behind Goldsmith followed the 5 DePaolo Fords - Fireball Roberts in 2nd, Curtis Turner 3rd, Ralph Moody 4th, Joe Weatherly 5th and Marvin Panch 6th.

As the green dropped, Goldsmith took off and led the first half of the race - 27 laps. Weatherly lasted only 17 laps and was the 1st DePaolo car to fall out of the event. Seventeen laps later - and seven laps after he surrendered the lead, Goldsmith's Chevy was done for the day.

Fireball picked up the lead from Goldsmith and led the remaining 29 laps. Fortunately for his team, Weatherly's exit was an anomaly. His remaining teammates followed him across the line: Fireball 1st, Turner 2nd, Panch 3rd, and Moody 4th - the only cars to finish on the lead lap.

Although I don't remember exactly the way it reads, there was a post sometime back about Fireball winning this road course event and then winning the road course event at the track in Augusta, Ga. in November, 1963. That gave Fireball a perfect score on road courses on which he had competed through that time. I have looked for that post this morning with now success. If I do find it, I'll let you know.

Great post, Chase. We are preparing to be off and running for the New Year with Racing History Minutes starting January 2nd.

Tim, you had referenced Fireball's 1956 Titusville win in your report on his win in the November 17, 1963 Augusta road course race, stating he was the first NASCAR driver to win two road course races.

Fireball wouldn't have been "perfect" on the road courses at that time, however, because he finished second to Buck Baker at Watkins Glen in 1957.

It never even crossed my mind that we had NASCAR GN races at these layouts and who knows how many others that were road courses or airport layouts before Fireball's 1963 Augusta win:

I'm sure someone has a listing of all the early "road course" NASCAR races. It would be interesting to see in one list.

Lee Petty drove the #42 Petty Enterprises 1956 Dodge at the Ti-Co Raceway on Dec. 30th, 1956. The track was actually located at the Titusville- Cocoa Beach Airport in Florida. This was the 3rd race of the 1957 season of which Petty went on to win 4 races during the season.This is a A.B. Clark photo from the Marty Little collection.

The only NASCAR race held in Brevard County. Nevertheless, some drivers who were frequent runners at the long-defunct Eau Gallie Speedway in Melbourne included Stan Kross, Dick Joslin, and current Congressman Bill Posey. 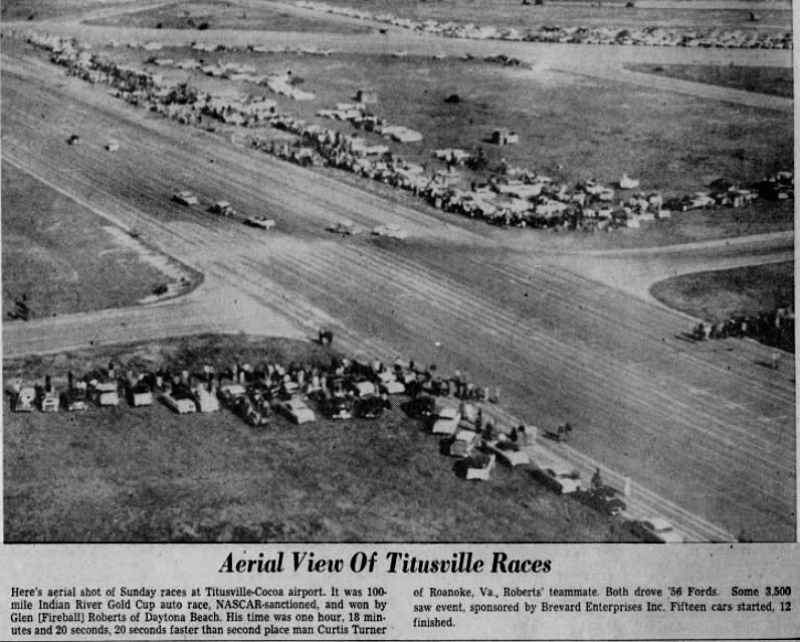