In his first ride for Bud Moore, Chesapeake, Virginia's Ricky Rudd put the Wrangler Jeans Ford #15 on its nose in the February 1984 Busch Clash at Daytona before starting a sickening series of barrel rolls. Rudd was beaten black & blue after his ordeal and drove the 1984 Daytona 500 with swollen, blood shot eyes taped open.

The very next race was scheduled at the worn old half-mile at Richmond's Fairgrounds - a track that took a high toll on drivers and cars.

Moore outfitted Rudd with a special flak jacket for the race and the crowd went wild as Rudd battled side-by-side with Dale Earnhardt driving the Richard Childress Wrangler #3 Chevy. In 1983 Earnhardt had driven for Moore and Rudd for Childress.

Smart tire management by crusty old Bud Moore helped Rudd defeat Darrell Waltrip, another former Moore driver. There has never been a more popular win at the Richmond track or a crowd as vocal to see the young, injured home area driver defeat all odds and make it to victory lane.

That was a great race! Ricky Rudd was always very nice to me in every encounter. When my son and I went to the Richmond race on September 8, 2001, Harvick banged Rudd around and I told my son then, Harvick has messed with the wrong guy. Sure enough, Ricky caught him and it was quite the payback.

Ricky Rudd is known as one of NASCAR 's all time toughest drivers. One example of that toughness was in 1998 at Martinsville, when Rudd dominated the NAPA Auto Care 500 without power steering and fresh air coming into his racecar. Temperatures at Martinsville that day were in the tripledigits andRudd was breathing in exhaust fumes for basically the entire race at one of the sports' toughest racetracks.Ruddpassed out in victory lane in one of the gutsiest performances in the sports history.

However, that's not Rudd's best performance. That cameback in 1984 at the RichmondFairgrounds Raceway, when Rudd did almost the unthinkable.

Ricky Rudd was ayoungster back in 1984. His Winston Cup career started back in 1975 when Rudd was just 18 years old, running four races for his father. Heran 25 races in 1977 and won NASCAR 's Rookie of the Year Title. In 1979the 22-year old Chesapeake, Virginia native was hired by Junie Donlavey todrive his famous #90 Ford. Rudd accepted, running 28 of31 races andfinishing ninth in the seriespoint standings.Rudd was replaced by Jody Ridley and ran a partial schedule in 1980. In 1981 he ran a full season for DiGard Racing and finished an impressive sixth in the standings. He moved to Richard Childress Racing in 1982 and in 1983 he gave the company their first two wins, as well as his first two wins of his career.

When 1984 came Rudd accepted a deal from Bud Moore to drive his #15 Wrangler Ford. Rudd's career at Bud Moore's team got off to a not so good start. 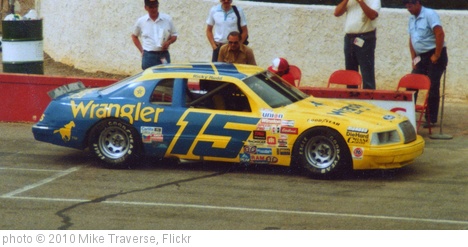 Because he won threepoles in 1983, Rudd was eligible for the 1984 Busch Clash. Rudd was running fifth15 lapsinto race when coming off of turn four contact was made between Rudd and Jody Ridley sending Rudd's Ford spinning into the infield grass. Rudd's car hit a piece of the grass right before pit lane and got airborne. Rudd's car flipped six times in every direction. It was a scary accident. Emergency workers raced to the scene.

The #15 Wrangler Ford sat there all battered and torn apart. From the look of the work it appeared Rudd was okay. Rudd was taken away in an ambulanceand wentinto the infield care center. Ruddhas a badly swollen face from the incident.Doctors recommended Rudd not to race but Rudd wanted none of it. Rudd describes the next events in his own words.

"It was one of these deals where you do what you have to do. I didn't start off with that in mind. I was at Daytona and had a pretty big wreck in the Bud Shootout it was the Busch Clash then came back, and we had a day off because it rained, came back to the racetrack, I guess a day had gone by since we had actually been in the wreck, went out in the race car. I didn't know if it was an inner-ear distortion problem, trauma to the inner ear, or whatever, but my balance mechanism went kind of haywire and everything would go dark when I went into the corner.

My face was swollen really badly, looked like I had been beat up pretty bad by somebody much bigger than me, it wasn't really hard to think about it. I looked at my face. I could hardly open my eyes to begin with.They were like little slits. What was happening was that I was going into the corner and the vertical g-load at Daytona is not a whole lot, but it's probably a G and a half, two Gs vertical max, but everything was going dark and it was mainly like shutting your eyes.So I knew I had to do something. I had to fix it, so there was some duct tape up on the toolbox. The guys were changing the spark plugs, I said, 'Let me go back and try this again.'

I never told them I was uncomfortable. I went around there wide-open but I never told them I was really uncomfortable in the car. I went and got a roll of duct tape. I didn't have Band-Aids. I would have used Band-Aids, but I didn't have any. But the duct taped it right there, so I just kind of took all the extra skin and taped it to my eyelid and taped it up to my forehead and put my helmet on and went on."

It was a remarkable feat. Being able to compete in a Winston Cup car with a face that bruised was something special. Rudd finished seventh in the Daytona 500 but what he did at the Miller High Life 400 the following week was remarkable.

Rudd went out and band-aid his eyes open the next week, as his face was still swollen from the accident. He led 36 laps and won a fierce battle with Darrell Waltrip for his fourth career win.

It was an impressive finish and it's one of the memories that gave Ricky Rudd the nickname "ironman."

Bumping up for the 31st anniversary of Ricky's hometown win for Bud Moore following his horrendous Daytona crash - below. What a blessing that he didn't hit the no SAFER Barrier concrete wall.