With all the snow and ice we have had in the South this winter, it harkens us back to this History Minute race today. The "Richmond 400" originally scheduled for February 25th, was postponed on that date for a heavy snow storm that hit the Richmond area. When the cars returned on March 11th, it was a cold and grey day which had, in fact, experienced snow flurries around the area the morning of race day.

Thirty cars would start the event with Bobby Allison in the Bud Moore Ford winning the pole with a speed of 92.957 mph. Benny Parsons in the M.C. Anderson Chevrolet would start second, Darrell Waltrip in the DiGard Chevrolet third, Dale Earnhardt in the Rod Osterlund Chevrolet fourth and Terry Labonte in the Billy Hagan Chevy fifth.

Bobby Allison would take off from the pole and keep that Bud Moore Ford out front for the first 156 laps. Bobby hit the pits first and Cale Yarborough took over the lead for five laps before Allison took over again. Allison led through lap 224 and then Cale went back to the front never to be headed again. Cale would build a lead of six seconds at the checkered flag over Bobby Allison.

After the race Cale said he had dropped back early because there had been "enough trouble. I wanted to stay out of the crowd and take no more chances of getting into any more trouble.When the field got strung out, I made my move". Cale was obviously referring to the nose to fist exercise between himself and Bobby Allison at the end of the Daytona 500 in the nationally televised event. Many may not know that only three weeks after the Daytona dust-up, Donnie Allison and Cale wrecked again in the "Carolina 500" at Rockingham. The accident at Rockingham came with Cale leading, Donnie in second and Bobby third. Donnie dove under Cale going into turn three and Cale didn't see him. The two banged together hard and spun as Bobby slipped by on the inside.

Surprisingly, Donne and Cale didn't blame each other, calling it a racing accident. However, others caught up in the mess offered harsher remarks. Darrell Waltrip opined that "someone should drag Cale out of his car and whip his butt". However, D. W. did not make a move in the direction of the Yarborough garage stall. Richard Petty, also eliminated in the wreck, said "Donnie got underneath Cale. He flat outmaneuvered him. Then Cale kept going lower and lower. He drove him right onto the apron. It is what I call a misjudgment I driving".

Even the cold, the snow flurries and the grey skies did not keep down the crowd for Richmond. There were 21,000 fans in attendance and reports are that fans had to be turned away as there were no seats left at race time.

Cale took over and won the race in grand style. Rookie driver, Dale Earnhardt, driving for Rod Osterlund ended up 13th, a full 10 laps behind the winner.

The Pettys weren't getting the leverage they needed to get STP to up their support of the 43. The 43 ran a pretty normal day-glo red and Petty blue scheme at Riverside but without an STP oval on the hood. At Daytona, the 43 won but absent any day-glo red stripes or the STP oval on the hood. At Richmond, PE took it up another notch by removing the day-glo red from the sides of the car. STP then got the message. Things were worked out within the next race or so,and the full colors and decals returned. Interesting in retrospect how the team still forged ahead and ultimately won the championship.

And despite a stellar beginning to the 1979 season with a top 15 finish with some laps led at Daytona, the rookie Earnhardt found Richmond a tough place to go. He spun early, jacked up the field, and never really got back into the flow of things. I'd say he figured the place out though later as his career progressed. - Donald Evans

1979 was when Busch Beer made its big splash in NASCAR. In addition to the Busch Clash, the A-B brand was sponsoring Cale Yarborough in Junior Johnson's #11 Cup car, a team that had once carried sponsorship from Canadian brewer Carling Black Label (Hey, Mabel!)

The ad below appeared in the Spartanburg paper on the page opposite coverage of Cale's 1979 Richmond win:

Police investigators in North Carolina have ruled that a former NASCAR racer found dead last week died of a self-inflicted gunshot wound to the head.

Roy Tyner, 52, who competed on the Winston Cup circuit between 1957 and 1970, was found dead Thursday in the burned cab of his truck near Conover.

Tyner drove the rig that carried the Budweiser and Busch Series show cars to speedways and advertising shows.

Gary Lafone of the Conover Police Dept. said a large-calibre pistol was found near Tyner's body. "Due to the nature and location of the wound, it was ruled self-inflicted," Lafone said.

The cab of Tyner's truck was burned, but Lafone said the fire "was a smoldering fire. There were no accelerates used."

Tyner drove 310 NASCAR races. He never won, but had 14 top-five finishes, including a second-place at Greenville, S.C. in 1959. He's best known for racing a Pontiac Grand Prix in the late '60s.

Poor Dave Marcis had terrible luck leaving Richmond Sunday night after the race when his tow rig caught fire on I-85 outside Durham, NC as reported by papers in Spartanburg and Tuscaloosa and revisited in 1982 in the Charleston, SC paper:

Richmond usually ran a Late Model Sportsman race on Saturday, but the NASCAR LMS and Modified divisions were already scheduled to race in a big doubleheader at Hickory on Sunday:

Great shot of the field lined up for the start. - Getty Images

When the Petty Enterprises team arrived in Richmond, they were without the Chief, Maurice Petty. The previous week at Rockingham, the 43 was one of multiple casualties of yet another skirmish between Cale Yarborough and Donnie Allison. The King was upset as were many other drivers. Chief was bent too and let his voice be heard to NASCAR officials Joe Gazaway and Ray Hill.

Gazaway approached Maurice to have the conversation and perhaps settle him down. But that wasn't MP's MO. He shoved aside Gazaway, helped get the gear packed & left for Level Cross. Hill then sent him a letter suspending him for the Richmond and Atlanta races.

And from Spartanburg Herald Journal

The program cover photo above shows Richmond racer, Sonny Hutchins (kneeling in victory lane in front of Emanuel Zervakis' #01 Late Model Sportsman) sporting the beard he grew after a patron threw acid in his face at one of the Richmond restaurants/bars Sonny operated.

The Orlando Sentinel reported that many folks thought Hutchins' rival, "Terrible Tommy" Ellis had something to do with it:

"The rivalry grew so intense with Hutchins that trouble often was expected. Someone once came into the restaurant Hutchins owned in Richmond and threw battery acid over everything. Ellis, people thought, was somehow responsible. In actuality, neither he nor his crew had anything to do with it."

Just imagine... snow flurries on the race day morning of Richmond's postponed event,  yet every seat was sold and fans had to be turned away at the gate. Many of those fans, I'm sure, wanted to be on hand for another Cale - Donnie dustup, but fans being turned away is a far cry from the current days of tearing down grandstands.

The Eastern 150 NASCAR National Championship Late Model Sportsman race originally scheduled as the Saturday companion event to the 1979 Sunday Richmond 400 was actually run on Saturday March 3, 1979 at Richmond while the Cup and Baby Grand cars were at Rockingham. Former Grand National Rookie of the Year, Bill Dennis of Glen Allen, Virginia won that race. The Baby Grand cars wound up racing as the Saturday preliminary race a week later.

Here's the LMS coverage from the Fredericksburg paper and a few David Allio photos of the March 10-11, 1979 Richmond races: 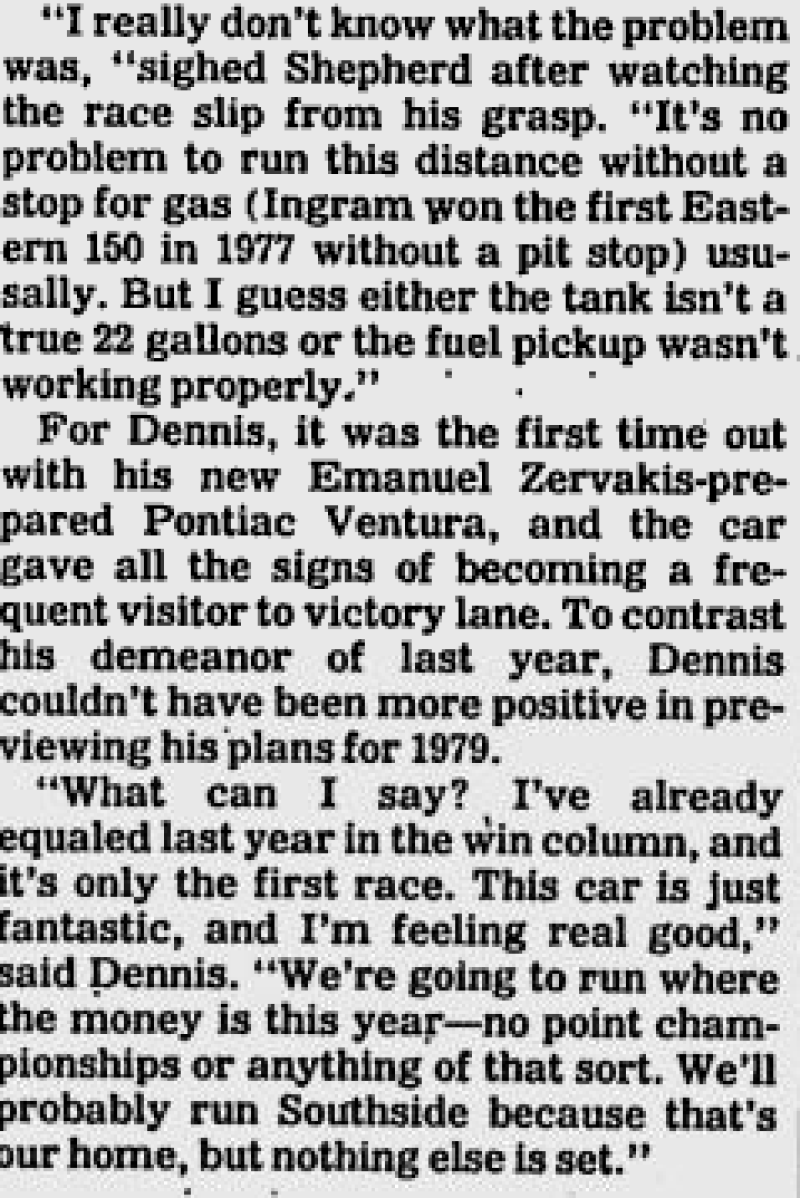 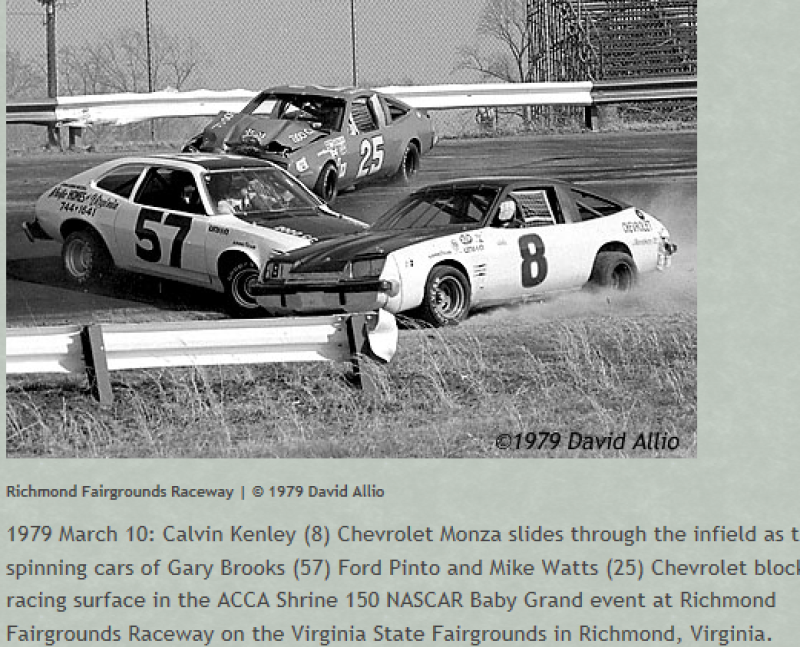 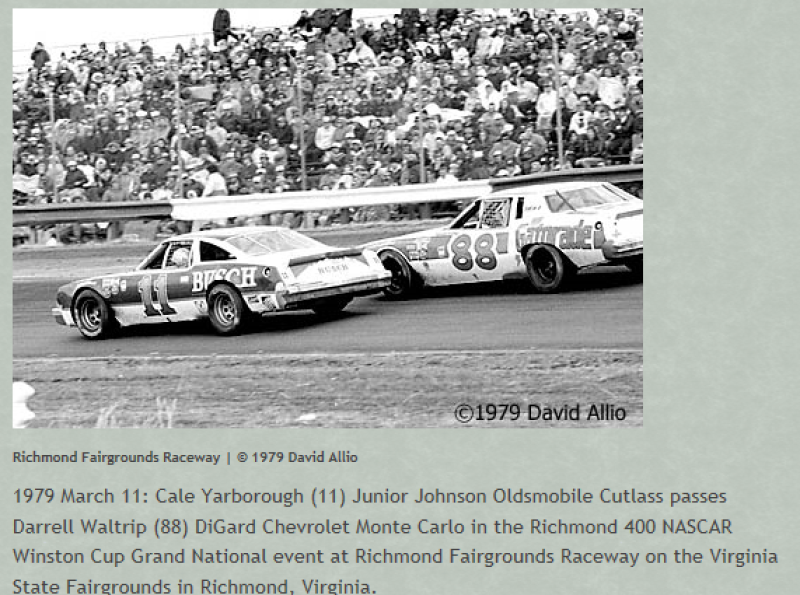 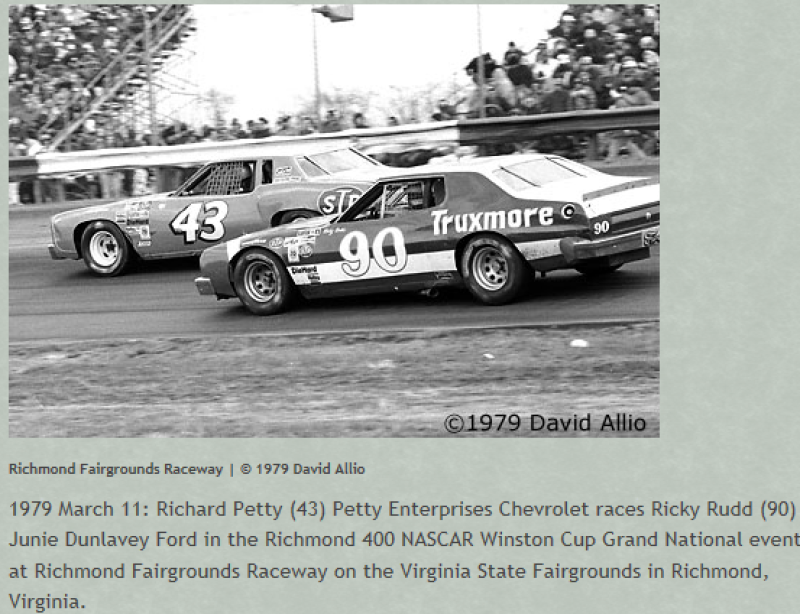 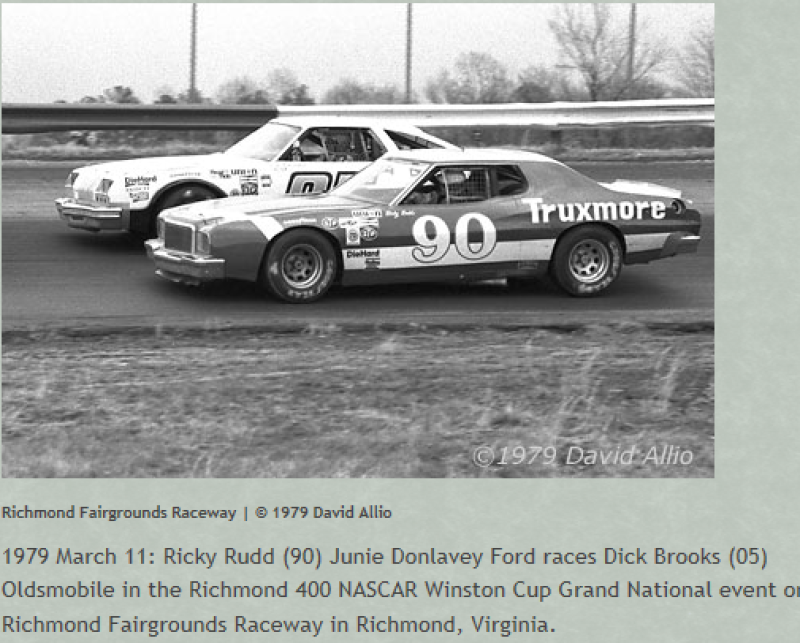