In the first 100-mile Daytona qualifying race, Richard left the yard - sailing over the wall. For the most part, he escaped unscathed. But shortly after leaving the infield care center, he heard that his dad and primary breadwinner for Petty Engineering, Lee Petty, had also sailed out of the track.Coincidentally, Johnny Beauchamp - who Lee battled to the finish line 2 years earlier in the inaugural Daytona 500 - sailed over the wall with him.

Lee was critically injured and required months of hospitalization and therapy. Richard, Maurice, Dale Inman, and the crew had to haul home 2 wrecked race cars, no purse winnings from the 500, no hands-on leadership from Lee, and little clue as to where to go from there.

The Petty team could have folded right then and there. But with encouragement by Lee and hard-work ethic by Richard and Maurice, the team pressed on. Other experienced drivers including Jim Paschal and Buck Baker were instrumental in racing as teammates with Richard who was still trying to develop as a racer. Over time, Petty Enterprises thrived.

The Daytona crash ended for the most part the competitive racing of Lee AND Beauchamp. Lee only raced a couple of times after healing. And from what I can tell, Beachamp never did return - at least not to NASCAR Grand National racing.

Lee and Beauchamp in their "Uh oh - this is bad, this is bad" moment (TMC picture):

I'm always stunned to see those 2 cars sail over the turn 4 wall. Having been to Daytona (though not since 1997), I can envision hospitality areas, parking, souvenir trailers, etc. perhaps being there now where Lee and Beauchamp came to rest back in 1961. Just amazing. 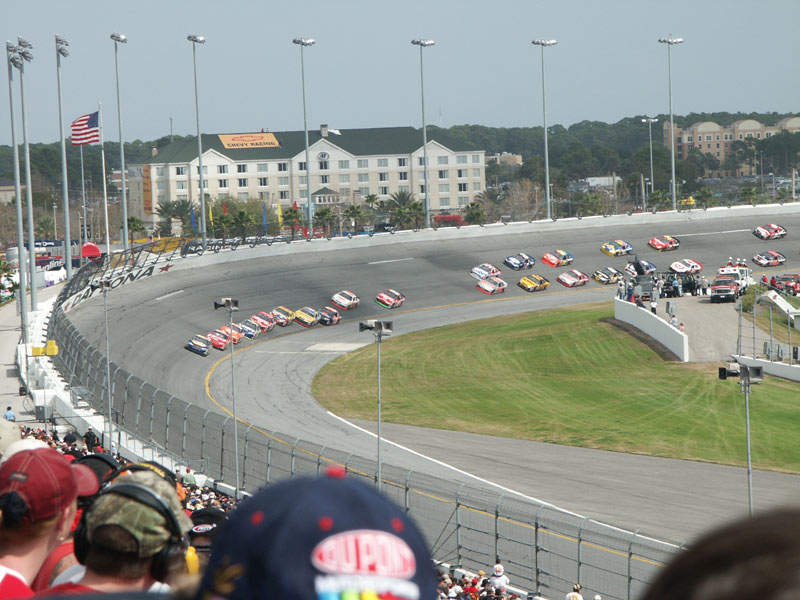 Imagine how different stock car racing history might have been had Lee's terrible accident not happened.

A couple of fellow Petty fans have this discussion about every year or two -especiallyas we considered those 200 wins:

And sometimes I go in a non-Petty direction:

We don't try to focus too much on the darkness of racing's wrecks and fatalities. Yet, we still think how history and racing records would have been different.

All of the above are exceedingly interesting topics. We'll never know, will we?

1962 was my first trip to Daytona so I wasn't there for the 61 accidents. But, my uncle Bobby, who had gottem me into racing back in 1952 was a huge Lee Petty fan and I remember him constantly trying to find out how Lee was doing. One day, about a week after the wreck, I remember Bobby calling the hospital in Daytona and after several tries he got through. That was before HIPPA rules and the only thing, and I'll never forget this, the person he talked with said Lee was "holding his own". There was little or no racing coverage back then in Columbia, SC, and it was hard to find out things. For Uncle Bobby to have made a long distance call was mind blogging as all of my family believed that long distance calls were far too expensive to make unless it was an extreme emergency. To my Uncle, find out how Lee was doing WAS an extreme emergency. Funny how these days we pick up the phone and call all over the country, or the world, with very little thought at all. My Uncle Bobby epitomized the passion of a true fan in 1961 and still does today although he refuses to tell you who his favorite is. I keep prying him on that but he just smiles! I have to try to imagine how MY life might have been had it not been for the passion for racing my Uncle Bobby has and how he took time to share it with me.

Still remarkable to me year after year that Lee and Beauchamp landed in 1961 where souvenir trailers are located today.

I wasn't aware Richard also left the track that weekend. Thanks for the video links and pictures. I'd like to think we'll never see a car leave the track again but the way these guys race these days, nothing is impossible.